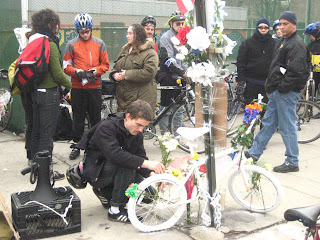 (Ryan the Boy affixes flowers and candles to Anthony's Ghost Bike)
The crowd massed on an semi-derelict corner in Bushwick, at least eighty strong, straddling their various two-wheelers: simple road bikes, complex mountain machines boasting thirty gears and sets of shocks, fixies, single speeds, a clutch of homemade mutant tall bikes and urban choppers. The mood was somber, like the overcast gray skies, but tinged throughout with a glimmer of hope. The group’s collective attention was focused on a small BMX bike with thick tires, painted all in white, covered with flowers and surrounded by candles, at the corner of Palmetto and Central Avenues. Placed underneath the bike’s frame was a little wooden placard, which read:

Then one of the organizers of the day’s procession took to a overturned milk crate, a black bullhorn held aloft. In a clear voice laden with emotion and tension, she began.

Today we gather in honor of those killed on New York City streets. This past year countless pedestrians were killed by motor vehicles. On average, one pedestrian is killed every other day on the streets and at least twenty-three cyclists have been killed in 2007. We are riding in honor of Anthony Delgado, Jeffrey Moore, Mark Grichevsky (GRE-CHEV-SKY), Juan Solis, Luis Ramos, Carolina Hernandez, Elijah Wrancher, Habian Rodriguez, Craig Murphey, Sam Hindy, David Smith, Franco Scorcia, Ronald Mortensen, eleven unnamed riders and the countless pedestrians and cyclists whose deaths go unreported and unrecognized. We ride with love in our hearts, with sadness for what has been lost, with rage that these crashes didn't have to happen, and hope that we never have to do this again. With these ghost bikes and memorials we want to raise awareness about a bicyclist's right to the street and pedestrian's right to safe passage in the hopes that New Yorkers can change the climate on the road and learn to respect each other.

The bicycle advocate then went on to tell us that on April 29th, 2007 Anthony Delgado was riding his bike home with a friend from a local baptism. An SUV pulled out of the lane in order to pass a slower-moving car and hit Anthony head on. He was pronounced dead at the scene. The ghost bike, marking the point of impact where Anthony was struck, is his neighborhood memorial. 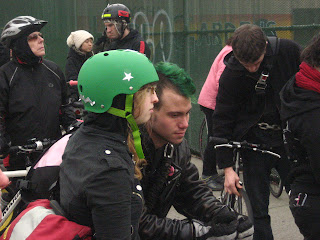 (two mourners, Marin and Riley. Neither knew Anthony Delgado,
nevertheless, the emotional pull was strong.)
This ongoing, worldwide project is called Ghost Bikes. According to its stark, simple, yet emotional explanation on the website, “Ghost Bikes are small and somber memorials for bicyclists who are killed or hit on the street. A bicycle is painted all white and locked to a street sign near the crash site, accompanied by a small plaque. They serve as reminders of the tragedy that took place on an otherwise anonymous street corner, and as quiet statements in support of cyclists' right to safe travel.” Originally started in St. Louis in 2003, Ghost Bikes have been seen throughout the five boroughs since June 2005, thanks to the NYC Street Memorial Project and the arts collective Visual Resistance. VR is an open alliance of artists and activists who understand that one needs more than soapbox oration and take-it-to-the-streets activism to engender change in any stultified community. They were the ones who arrived on scene minutes after the car crash that took the life of Elizabeth Padilla in ’05, and they were the ones who brought a bicycle, painted it white, and locked it to the lamppost on the corner where the victim lost her life. An impromptu memorial with deep repercussions, the idea soon took off. In 2007 the project shifted hands to the NYC Street Memorial kids, who consolidated the various efforts that it takes for each ghost bike: research on the crash itself (which often involves talking to reticent cops or delving into various reports), contacting the families and loved ones, constructing and painting the bike, bringing it to the intersection and finally, upkeep. Everyone involved is an active member of NYC’s cycling community, and all are 100% volunteers, from conception to presentation. 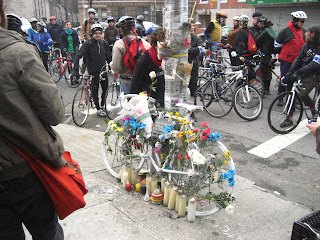 Back to that blustery morning in Bushwick. This was the third anniversary of the Memorial Ride, and each year the ride commemorates lives lost the previous year. Most of today’s riders had started in Bensonhurst, and had ridden up to Bushwick stopping at various Ghost Bike Memorials along the way. Other rides of the same design were happening throughout Queens, the Bronx and Manhattan, with a general convergence at the Williamsburg Bridge, for a procession and rally at City Hall to make NYC’s streets safer for cyclists. But at that moment, with Anthony Delgado’s mother on hand, making small thank yous amidst her choked-up chest, with gospel blaring from the Ford Explorer and Anthony’s smiling face airbrushed onto the hood, with eighty-plus cyclists raising their bikes in a moment of silence, the social movement, the politics, the activism was only about one thing – the life of a thirteen-year-old boy, taken too soon. 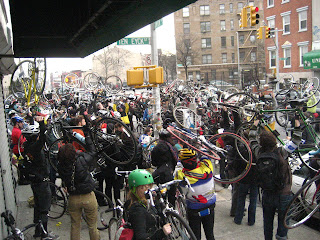 (a silent bicycle raise to honor the victims)
(originally published 1/07/08 on www.thelmagazine.com)
Posted by iamMattLevy at 9:22 PM