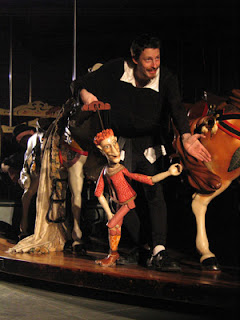 The audience shuffled into the cold Water Street warehouse space. A chatty bunch of about twenty-five occupied the folding chairs set up in front of a marvelously detailed 20th century carousel placed behind two shuttered chain-link gates. Only a few children were present, but by the looks of the adults’ eyes, the entire audience was prepared for a childlike transformation, once the gates rolled up and the carousel started moving. Calling all adults, children, Shakespearean superstars, carousel confidants and puppetry populists: the Czechoslovak-American Marionette Theater presents Hamlet, atop Jane’s Carousel, through this weekend.

The carousel is an ongoing restoration project overseen by Jane Walentas, wife to DUMBO developer David. The carousel was built in 1922 by the Philadelphia Toboggan Company; the couple purchased it in 1984, and Mrs. Walentas has spent the better part of two decades refurbishing it. The eventual intended home is Brooklyn Bridge Park, but the park isn’t ready for the ride just yet. So it sits, sometimes in motion but mostly just waiting for other creative souls to make the most of a glorious old-time amusement ride.

Which brings us to the Czech-American Marionette Theater. What better set for a mini-production (ninety minutes flat, five puppeteers, about a dozen puppets) of Hamlet, featuring mini-inanimate-actors, than a carousel? You’ve got the cyclical conscience of the lead and the circular logic of life-or-death existentialism; what’s more, both the set and the stars are made out of gorgeous hard-carved wood!

Okay, not all the actors were inanimate. The three men and two women performers, carrying fifteen roles between them, were always an active presence on the stage. Crawling across the benches, straddling the horses and slithering between the rotational poles, they made the best of their one-of-a-kind carousel. These were puppeteers who acknowledged their presence next to each two-foot co-star, which allowed them to make the drama big enough for the children in the to enjoy and understand, but intense and goose-flesh inducing enough for us big kids during the truly heartbreaking scenes. One particularly powerful moment shows us Ophelia’s madness, high above the audiences’ heads.

There are a handful of original songs performed by the in-house musician, on keyboards, resonator steel guitar, harmonica, mouth-harp, and uke. The songs illustrate the action nicely, and the musical genres cross over from gospel to Nordic war chant to Southern blues to Eastern European folk to cinematic soundtrack. The puppets do their thing, sometimes less interestingly than the performers, and sometimes as interesting. Hardly do the puppets outshine the hardworking actors, with the exception of the singular, multi-faced puppet representing Rosencrantz and Guildenstern. There’s also a wondrous interlude with Balinese shadow puppets during the play-within-a-play scene.

But of course, the true star in all of this is the carousel. When turning counter-clockwise or when sitting absolutely still, with all its light bulbs on and mirrors glinting in the lights, or even when dark and ominous, a portent of things to come, truly nothing can beat its old-Americana majesty. Once the viewer gets over the intense envy developed while watching these actors with their marionettes climb and jostle, dart and skip, weave and work their ways around this rotating work of art, the entire production ends up playing second fiddle to the stock quiet and simple spectacle of the carousel.

Posted by iamMattLevy at 7:37 PM