Hong Kong is contractive, a palimpsest, and unlike anyplace else in the world; 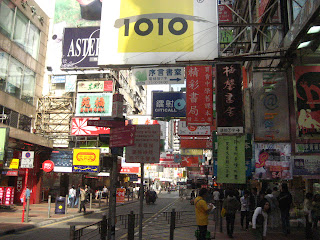 in terms of verticality, in terms of advertisements, in terms of infuriating-pedestrian-unfriendliness, commercialism, megalomania, surging electricity, large-scale lighting 'spectaculars' on the tops and sides of buildings. Hong Kong kicks ass, but I'm not sure if its kicking its own ass, or the ass of its residents, visitors, neighbors and friends. It kicked our ass, that's for certain.

To recap. Jonah, the youngest Levy boy is spending a few months abroad, enrolled in courses on visual studies and digital media at Nanling University. So Dad Levy, Alisa Brot (his fiancé) and I decided to head out here to visit and adventure for 1-2 weeks. We did the same thing in November 2006, when the J-ster spent 3 months in Hanoi, Vietnam. The kid likes Asia. The Vietnam voyage included Gideon, the middle Levy, but this time we left him at home to cover the business. Also, he's broker than the rest of us. Also, he doesn't travel very well. The rest of us travel very well together; we're all into adventure, history, sightseeing, bargain shopping, and most of all, ETHNIC EATING! So that's what brought us to Hong Kong. The schedule: 4 days in Hong Kong, then all four of us fly up to Beijing for an assortment of days - Alisa to NY on the 1st; Jonah back to HK on the 4th, and Dad and I the 20 hour flight on the 6th. So welcome, Levys (and Brot) to Hong Kong - a bunch of rough-edged and tough-gritted, street-wise and cash-savvy native New Yorkers; all used to the neon brashness of Times Square, the hustle/bustle of Canal Street, the mercantile excesses of 5th Avenue during the Xmas Shopping Season, all of it was absolutely bupkis compared to the overwhelming anti-humanizing effects of the streets of HK

The Special Administrative Region of Hong Kong is comprised of four territories, therefore, it is NOT part of China proper. The four territories correspond pretty nicely to our beloved hometown. HK proper is, of course, sparkling Manahatta, economic powerhouse for the entire seaboard. Kowloon, right across the river, is a large region segmented into smaller hoods, each one known for their cultural or commercial specialty, be they immigrants, boutiques, malls, hip cafes, and rapidly rocketing real estate; this would be the equivalent to our brilliant home borough of Brooklyn! The New Territories is a massive tract of land north of it all and attatched to mainland China; mostly parks and working class hoods corresponds to The Bronx. The Peninsula Sai Kung, which is east of Kowloon (part of the larger landmass that reflects Long Island) has many smaller bodies of water and tiny islands scattered throughout the place: thats Queens and the Jamaica Bay Wildlife Refuge. And of course, darling Staten Island is represented by Lantau Island, the most remote of the five territories and home to both Lingnan U and Disneyland Asia.

Imagine a city with the signs and the hurriedness, the abrasion and glare, the flash and panache of Times Square, but with everything in Cantonese. Now visualize all those signs, buildings, buses and people are layered one on top of the other, in a vertical sardine-tin stacking style that stretches between two and eight levels high. For example, the buses are double-deckers. The metro goes underground two to five levels deep, where transfer-stations have trains of opposing directions layered vertically, as opposed to horizontally, across the platform as in New York. The local business signs on the street are twelve stories worth - one advertisement per floor, running the whole height of the building, and in most cases, craming more signs perched in the front, center, and rears of blocks. Now watch as this headachey Cantonese Times Square and shopping district expands to cover the entire island of Manhattan! It's exhausting. Not that we didn't have fun while in Hong Kong. But when one wishes for the calm and serenity of Lower Manhattan during a weekday lunch rush, you know that there's something wrong with the vacation spot you're at.

The fun we did have:
* Taking the Peak Tram to the top of Victoria Peak – a hundred plus year old funicular railway that leads to the top of the mountain in the middle of the city. You 'aint leaned nothing until you've leaned a good 45 degree angles into the hill as a 60 year old wooden tram chugs upslope at 6mph. 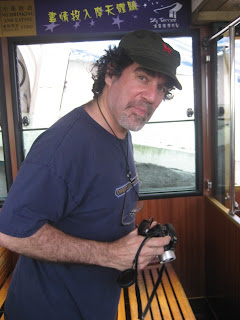 * Watching Jonah kick some serious ass in a tournament-style rugby game. Keep in mind that my brother is, at a fresh-faced 21 (his birthday was Monday, and part of the reason we went Chinabound) a lanky, stick-figure kid of 6 ft 2, and probably the last choice on a rugby team. Except that most of his team were fellow Westerners, and all his opponents were tiny shriveled up Chinese college kids. Therefore, Jonah slaughterized the opposing teams. I mean flat-out pulvernated them. Making the first of many goals and equally many tackles, we were proud of the kid. 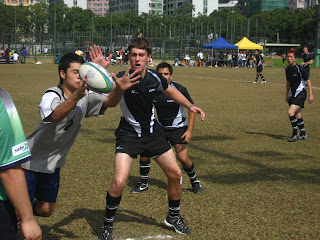 * We wandered markets and bargained down too little and paid too much for all sorts of amazing and beautiful crap (to protect the surprise elements of many of these gifts, the information herein has been blanked out. Suffice it to say, there's a lot of jade and Mao involved.)
* We drank beer on the street. No open container laws! Woo-Hoo!
* We visited the beautiful bird and flower markets. 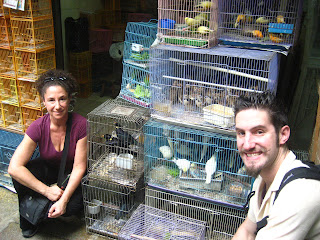 * We goggled at the post-modern, ultra-modern, hyper-modern and just plain ugly architecture of the downtown and Central business districts.

* We looked the wrong way down streets and almost got run-over many a time as all the driving in HK is British style – steering wheels and streets all on the wrong (other) side.
* Checked out the noonday gun, which has been firing at the stroke of noon ever since the 1800s and is in a popular Noel Coward song that I've never heard. 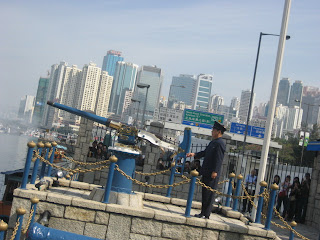 * One of the wonderful, only-in-Hong-Kong experiences was visiting the World's Largest Seated Bronze-Cast Buddha on Lantau Island. It's 634 meters tall and weighs 250 tons – about the same size as a jumbo jet. It was consecrated in 1993 at a cost of $65 million and is perched at the absolute top of a pretty little hill which gives one magnificent views across the island. 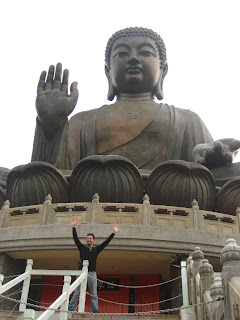 I spent the first two nights at Lingan U, in Jonah's roomate's bed, as he was home with his fam. The second two nights I spent on the couch of two of J's lovely friends, whom we all met at JONAH'S BIRTHDAY SPECTACULAR DINNER! In a huge group of 20 friends, we invaded a local Thai restaurant and had them cook us up a storm. Spicy tom yum soup, incredible green curry chicken, hot red curry beef, some of the best spicy pork ribs I've ever had, beer, jellied coconut crèmes for dessert, wonderful conversation amongst Jonah's classmates, girlfriends, buddied, Rugby teammates, family and folks, it was such a lovely experience. The kid is truly loved by all who get to share his warmth and giving personality. He's a great (big) little brother, and I love the kid. 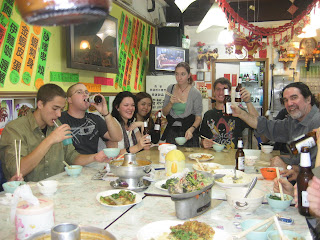 The last adventure for the Levys (and Brot) on Hong Kong was actually outside HK altogether, as we took the hour-long ferry ride to Macau island, another Special Administrative Region not part of China. Macau was settled by the Portuguese 300 years before Hong Kong, and its mixture of Portuguese cooking, British development, Chinese food, and absolutely outlandish Vegas style casinos and preposterous architecture was a bit of a melee – the Macau Mishegosh we called it. Essentially just running around the entire island and not experiencing much, other than a delicious Portuguese lunch; we tried to do the bungee jump off the Macau tower – it was closed. We tried to find some Colonial architecture – it was mobbed by Chinese tourists on their weekend sojourns to gamble (illegal in HK) and buy baked pork strips and egg custard tarts. We got lost entirely too many times and spent way too much on cab rides back and forth.
The conclusion to Hong Kong as we were running around was not a friendly place to live. Hard to visit as well – the entire city is built against pedestrian traffic – fences are installed on practically all the corners to prevent people from crossing at all – streets are traversed via underground passageways; cars, busses, trams and trolleys take right of way against those on foot; the lights are interminably long at intersections that can be crossed; and to boot alongside the pedestrian impossibilities, every single available interior space that isn't an office or a home is a mall. The passageways in the metro are malls. The bathrooms in parks are inside malls. The Ferry terminals have stalls and shops. Malls stacked ontop of malls built under malls. Vertical retail shopping experiences as far as the eye can see. It was dehumanizing, infuriating, unbelieveable. It was nice to move along to Beijing, after only 4 days. Once we got to Beijing, and China itself, things took an incredible turn.
More pictures will be viewable on my Flickr account once I get them all up there - sometime the week of Dec 10th. Keep em peeled. Beijing updates coming soon.
Posted by iamMattLevy at 8:01 AM