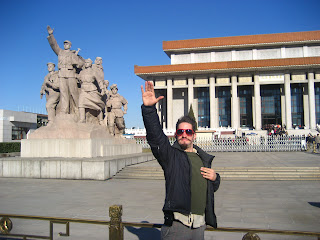 I’ve just returned to NYC from a two-week adventure/vacation to visit family, friends, and a beloved, taxidermy’d Communist leader in Beijing and Hong Kong, the respective characters of the three cities having been the subject of much conversation between friends and family over dishes of Peking Duck and Szechwan Chicken. This New York-ophile found Hong Kong too unfriendly. Four days there, and it was apparent that the city hates pedestrians. With most of the streets practically off-limits to crossers (via the ubiquitous torso-high white metal fence), the sidewalks narrow (okay, not as narrow as Lower Manhattan’s walks, but pretty damn narrow) and elevated skyways looping the pedestrian from one office complex to another without ever touching ground, 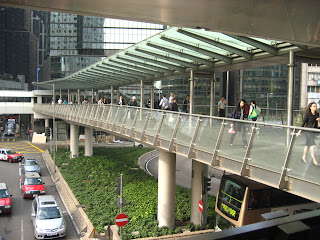 the city’s layout encourages more and more people to ride around as opposed to walk about. Many of the boulevards were only crossable via underground passageways. With the high-level, high-intensity, fast-moving traffic — a combination of double-decker buses, double-decker light-rail trams, cars, cabs, vans trucks and bikes (not many of those, unfortunately) — all going the other way, like in England, it made for intense traffic phobia and disorientation.


Also, Hong Kong has a lot of shopping malls. A lot of shopping malls. Mini-malls in the metro stations; a junk clothing mall (like Fulton Street in downtown Brooklyn) mixed in with a building full of hostels; a fashion and accessories mall in the ferry terminal; a luxury mall connecting an underground intersection crossing with a park with this passageway acting as the only way one can access the park . . . it was exhausting. Hong Kong’s relentless commercial valuation of every soul just trying to get around was more than a little depressing. It felt like an entire city of Midtown Fifth Avenues and Lower Broadways in SoHo.

Beijing is more of New Yorker’s kind of town. First off, it has twice the population of NYC. So they’re used to high-density living and hundreds of people crossing the street at the same time. Beijing is also super-flat, like Manhattan. Our flatness is manmade — we flattened the hills to build skyscrapers. The word Manhattan comes from the Munsee Indian word Mannahatta, which has a few different meanings: 1) long hilly island, 2) place of timber to make arrows, and 3) place of general inebriation. All true. Beijing, however, is naturally flat — a blank slate to build upon. It was developed over three hundred years but formalized when Chairman Mao and the Commie party widened the streets in 1949. Our man Mao didn’t do anything half-assed: eight-, ten- and twelve-lane boulevards are the norm, for Soviet tanks to squeeze through in case of riots. What’s more, the entire city is on a grid plan. Like Manhattan’s grid plan, this made following maps and orienting the city on a bicycle easy and a blast. New York and Beijing are on the same latitude, so they experience (mostly) the same weather patterns. And Beijing is a foodie’s paradise: incredible eats and phenomenal street food all up and down the tiny hutongs — little rabbit-warren type villages for the lower classes. Most of the hutongs were surrounded by newly built 20 story high-rises for the quickly growing middle classes. 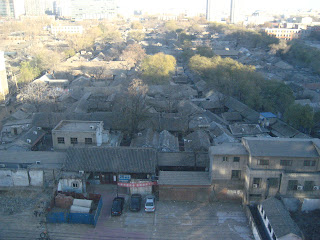 Kind of like the lux condos going up all over town, lording over tenements and their (formerly) working classes. There was energy in Beijing, a rush-to-get-things-done type of attitude, a confidence and righteousness in the faces and conversations (in English) that I had with residents, either expat or native born. The entire city is f’ing crazy about the upcoming Olympics (thankfully, unlike NY). The subway line was a little shaky and small, but within the next decade the entire metro is expanding to three times its current size — almost exactly what happened when New York’s original IRT lines were joined by the BMT in the 1910s and 20s and the IND in the late 20s and early 40s. Beijing, like the rest of China, is experiencing a housing and construction boom. And, Beijing has hipsters. And I’m sad to report that no matter the hemisphere, no matter the culture, the hipsters simply don’t dance. (See previous post) Just like back home.

As a native New Yorker, urban journalist and licensed tour guide, the list of cities where I feel I could live is a short one. I’m proud to add Beijing to the tally, if I could learn its confounding language. But until that unforeseeable day comes, there’s simply no place like New York.

Posted by iamMattLevy at 3:43 PM

likewise did you ever get a chance to ride around in a vehicle and experience the city from that point of view? or from the view of a person who has to make their living in that city using an automobile?

I rode around Kowloon and New Territories for about two days straight on double-decker buses. Just get on one, take it until you feel you want to get on another, keep map in hand, and bus-hop until you no longer can - then take a taxi home! it's fun, you see lots of places only the buses or bus travellers go - i.e. people using public transport.

it's another type of adventure.